​Mid-morning on Oct. 26, Mooseheart Child City & School will take down a tree housing the nest of a bald eagle pair. The pine tree has been dying for years, creating a dangerous situation for the eagles and the eaglets they raise in their nest every spring. The nest is also located above an asphalt parking lot, near a football field and a busy road.

The decision to remove the tree was done in close consultation with the U.S. Fish and Wildlife Service. Cathy Pollack of the USFWS Chicago Ecological Services Office said, "It's in the best interest of the eagle pair to take the tree down in the non-breeding season. The tree looks like it could come down easily in a storm and the nest looks large and heavy. The worst case scenario would be the tree coming down with the eagles or their eaglets in the nest." 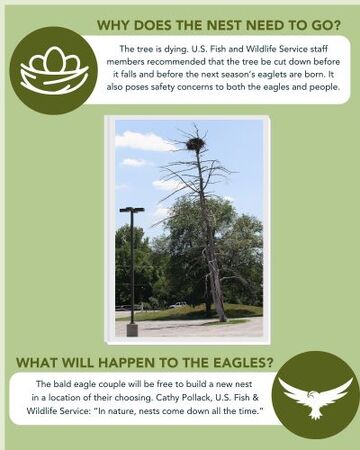 Concern for the nest and the eagles is warranted. In 2019, the male of the bald eagle couple living in this nest was killed when struck by a car on a nearby road. It is believed the current bald eagle couple in the nest are the original female and a new mate. In 2011, a bald eagle nest on the Mooseheart property fell to the ground during a storm. While the eaglets inside were unharmed, their parents didn't take care of them after the fall and they had to be cared for by a local wildlife center until they were old enough to survive in the wild.

In addition, the tree has become more unstable and the nest larger in recent years. Bald eagles add on to the structure of their nests up to 200 pounds every year, meaning the nest will only become more imperiled in the years to come.

In the process of exploring options to keep the eagles safe, Mooseheart staff connected with Anderson Humane, who began researching options for safely relocating the nest. However, after extensive research and in consultation with the U.S. Fish and Wildlife Service, it was determined that relocating the nest offers a less than 50% probability of success.

Removing the tree is the best option for the eagles, according to the federal agency.

Once the tree is removed, the bald eagle couple will build a new nest in a location of their choosing.

"A bald eagle pair will often build two nests and at the last minute decide which one to lay eggs in. So they may already have another nest," said the USFWS's Cathy Pollack. "If not, the pair will find another tree to build a nest in. In nature, nests come down all the time."

The bald eagle pair could begin building a new nest as early as December. 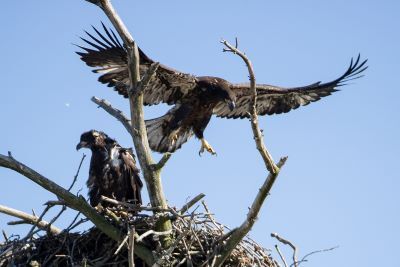 Mooseheart staff have received a U.S. Fish and Wildlife Service permit to remove the tree, which is required because bald eagles are a protected species. In keeping with the agency's requirements, the nest will be destroyed and disposed of once the tree is cut down.

Anderson Humane will keep a few sticks from the nest for the purposes of wildlife education.

Throughout this process, the shared goal of Mooseheart and Anderson Humane has been the safety and long-term health of the bald eagles.

"For over a decade, we have been privileged to have a mated pair of bald eagles (our U.S. national bird) choose Mooseheart as a safe place to live and raise their offspring," said Gary Urwiler, executive director of Mooseheart Child City & School. "It has been an honor to witness eagle life -- to watch newborn eaglets grow into young eagles ready for test flights, hunting, and adulthood. Unfortunately, time and weather have not been kind to their current nesting site."

Find the latest information about the bald eagles at MooseheartEagles.com. Contact Larry Dean at (612) 713-5312 or larry_dean@fws.gov with questions.

Mooseheart Child City & School is a residential childcare facility, located on a 1,000-acre campus 38 miles west of Chicago. The Child City is a home for children and teens in need, from infancy through high school. Dedicated in July 1913 by the Moose fraternal organization, Mooseheart cares for youth whose families are unable, for a wide variety of reasons, to care for them. The men and women of the Moose fraternity, through unparalleled generosity and volunteerism, provide the children with a wholesome home-like environment and the best possible training and education. Learn more at Mooseheart.org