Kane County's stretch of the Fox River encompasses more river miles than any other Illinois county. Its portion begins in Algonquin around river mile 80 and ends near river mile 45 between Montgomery and Oswego. Around 25 of Kane's 35 river miles are urbanized, meaning the land along the river corridor has been redesigned by human development. For a paddler, the view from the water changes from rocks, trees, and interesting plants along the edges to pavement, turf grass and the annoyingly frequent, obsolete dam.

​Kane County's urbanized stretch includes nine of the Fox River's 16 total dams, winning the prize for abundance by county. Dams are an undeniable menace to both wildlife and paddlers. There was no greater interruption of my paddling trip than exiting to shore to carry the boat and gear around dams, all of which present safety hazards for any river user. But I do have legs, which is more than the fish and mussels do.  These creatures  are trapped by the walls of dams, interrupting their natural range of movement and healthy breeding.

Pipes releasing untreated stormwater and treated wastewater were a common sight and smell while paddling through this highly populated stretch. I wondered about the composition of those inputs. For stormwater it is impossible to predict what the concentration and composition of contaminants may be, as the storm sewer system is at the mercy of whatever runs off the landscape at any given time.  I contemplated best practices for stormwater management and about the river as a drinking water source (Elgin and Aurora drink treated Fox River Water).

The pattern of pavement, pipes, and lifeless lawns is repeated as redundantly as the franchises in our suburban shopping centers. This habitat attracts few forms of wildlife, mostly limited to geese and park patrons, both of which tend to be the culprits of messes left behind at their riverside hangouts. While the geese don't know any better but to deposit their biological waste wherever they gather, the humans that recreate on the riverside certainly do, yet litter is more concentrated in these areas than anywhere else. 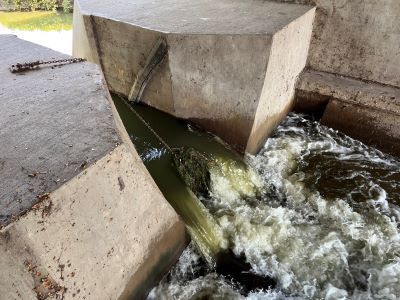 My full-length Fox River paddle of 2022 is captured in countless photos, videos, stories, and memories. The journey informs and inspires my work with the Friends of the Fox River every day. A trip takeaway for me is that while only humans harm rivers, only humans can help rivers. The good news is, it's easy to envision urban river corridors that work with nature instead of against it; and, in some situations one change in strategy can solve multiple problems.

For instance, the removal of dams improves water quality by restoring the river's ability to cleanse itself with its natural flow. Picture newly exposed areas free of obsolete infrastructure and instead revegetated with vibrant, and interesting-looking native plants. This reintroduced lost habitat invites back the tiny animals that feed our Fox River fish. An added bonus is that taller plants deter nuisance animals from sticking around. The buildings and roads may be there to stay, but the protection of deep-rooted native plants along the river's edge provides a buffer to manage the inevitable stormwater runoff, a safety measure we can provide for our downstream neighbors who rely on the Fox River as a potable source of water in their own homes.  A pretty smart guy you may have heard of, named Albert Einstein, once said that “imagination is more powerful than knowledge." Let's imagine together what the future looks like for our river in need.  ​

Visit Friends of the Fox River blog page for a detailed account of the entire paddling trip.

This article was written for Kane County Connects by Jenni Schiavone, Director of Education Programs Operations with Friends of the Fox River​.