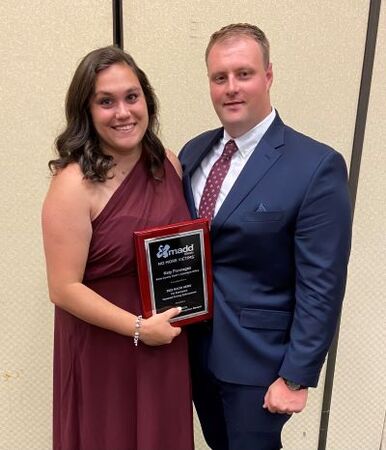 MADD presented ASA Flannagan with a plaque for her “Exemplary impaired driving enforcement."

Flannagan supervises the office's DUI unit. During the past year, she had more than 80 pending felony DUI cases at any given time. Many of the cases involved crashes that caused serious injury or death as a result of impaired driving.

Among the cases she resolved in recent months:

Among her pending cases:

​​“We nominated ASA Flannagan to receive this recognition from Mothers Against Drunk Driving because of her commitment to justice and public safety. Prosecuting DUI cases, especially those involving multiple offenders, is not an easy task. These cases are often complicated and involve a great understanding of the nuances of DUI laws. Also, as the supervisor of the unit, she mentors newer attorneys. Her dedication is a fine example for everyone. I'm proud and grateful she is a member of my team and I'm excited to see what the future has in store for her," said State's Attorney Mosser.