There are Dinosaurs in the Village of Gilberts

​This story/interview comes from the August 2022 Village of Gilberts E-Newsletter.  You can sign up for the newsletter HERE

Take a drive down Tollview Terrace and it will feel like you've taken a drive back in time; about 65 million years back to be exact!

Gilberts resident, Everett "Jurassic" Clark, has lived in Gilberts since his parents moved here in 1963. He has served as the Gilberts Village President from 2003-2005 and as a Village Trustee from 1990-1999 and again from 2009-2013. Over the past decade, Mr. Clark has been collecting realistic dinosaur statues to adorn his yard. Some of the dinosaurs fit in so well, such as the ones in his flower beds, you might even miss them when you drive by! The biggest dinosaur on his property is the Tyrannosaurus Rex which weighs about 700 pounds and is permanently mounted into the ground.

Where does one even find lawn ornaments such as these?
Mr. Clark said he's found these dinosaurs from a variety of online retailers like Design Tuscano out of Elk Grove Village. Some dinosaurs have even had to make a trip overseas and pass through customs. 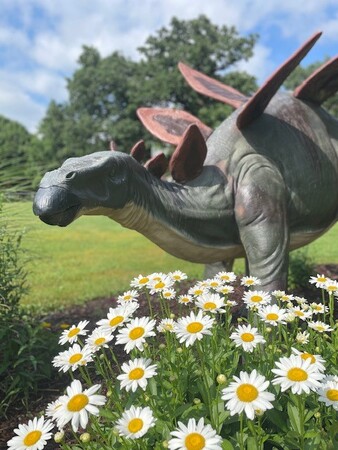 What do the neighbors think?
According to Mr. Clark, his neighbors have gotten used to the dinos and, among other long-time Gilberts residents, have affectionately deemed his home as "The Dinosaur House."

He said that people often do a double take and turn around to drive by his house again. As long as they aren't touched or climbed on, Mr. Clark is always welcoming to anyone who wants to take a picture with his dinosaurs!

Why not garden gnomes?

Like many people, Mr. Clark has always liked dinosaurs. He also likes how seeing and visiting his dinos brings joy to many other people, especially when COVID-19 first started and there wasn't much for people to do. Mr. "Jurassic Clark" said that the real reason he choose the unconventional dinosaurs was because "there's a little kid in all of us."