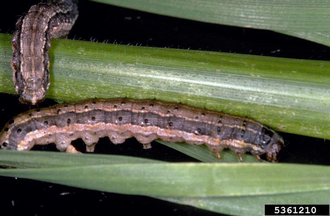 Fall armyworm caterpillars are enjoying a bountiful meal at the expense of farmers and homeowners. Prevalent in the southern states, the adult moths move north to Illinois to mate and lay eggs.

This year’s appearance is earlier and in higher numbers, says Nick Seiter, University of Illinois Extension field crops entomologist. In addition to costly attack on alfalfa, pastures, soybeans, corn, and small grains, the larvae of the moth are infesting lawns and gardens.

The moths lay eggs which then develop into the caterpillar larva that feed on crops, gardens, and lawns.

The caterpillars may appear green, brown, or black in color, with white to yellow lines running along its back from head to tail and an inverted “Y” between the eyes. Four black spots form a square near the top back of the caterpillar.

Caterpillars begin at less than 1/8 inch and can quickly grow to 1.5 inches after two weeks of feeding.

“With a large appetite and their habit of ‘marching’ in large numbers, fall armyworms can do some damage in just a few days,” Parker said.

After feeding, caterpillars tunnel about one inch into the soil and enter the pupal stage from which a moth emerges after about 10 days, and the cycle repeats.

Moths are grey with a pattern of light and dark areas and a wingspan of about 1.5 inches. Moths are more active at night, feeding on nectar and depositing eggs.

A female moth can deposit up to 2,000 eggs with four to five generations per year. Armyworms overwinter in the south. Southern populations increase in early spring with future generations moving north as the season progresses.

“Add one tablespoon of liquid dish soap to one gallon of water and pour over one square foot of grass,” Allsup instructs. “Armyworms crawl to the surface within seconds. Even two or three caterpillars can do substantial damage.”

This year’s damage is likely due to our wet and cool growing conditions, Allsup says. Severe cases may need to be treated with insecticides to control the caterpillars.

One should also apply additional water to lawns to force the regrowth. Fall armyworm larvae are controlled by the same insecticides used to control sod webworms.

Damage to corn can occur as ragged-edged holes on leaves, tassels, or ears. Caterpillars will also feed on the kernels of the ear.

“In turf, hayfields, or pasture, the damage often appears as brown or burned out patches and can often be confused with drought damage,” Parker said. “Scouting in the cool part of the day when the caterpillars are actively feeding will allow you to determine the size and number of fall armyworms to help decide control strategies.”

Fall armyworm infestation is best controlled when caterpillars are ½ inch or smaller. If pyrethroid insecticides are used, make applications early in the morning or later in the evening when larvae are most active.

“Control failure with the use of pyrethroids has been reported in the southern U.S. this year, and a few similar reports have come in from Illinois,” Seiter said. “Individuals should consider alternatives to pyrethroids if an application is warranted, though these alternatives often come with an increased control cost.”