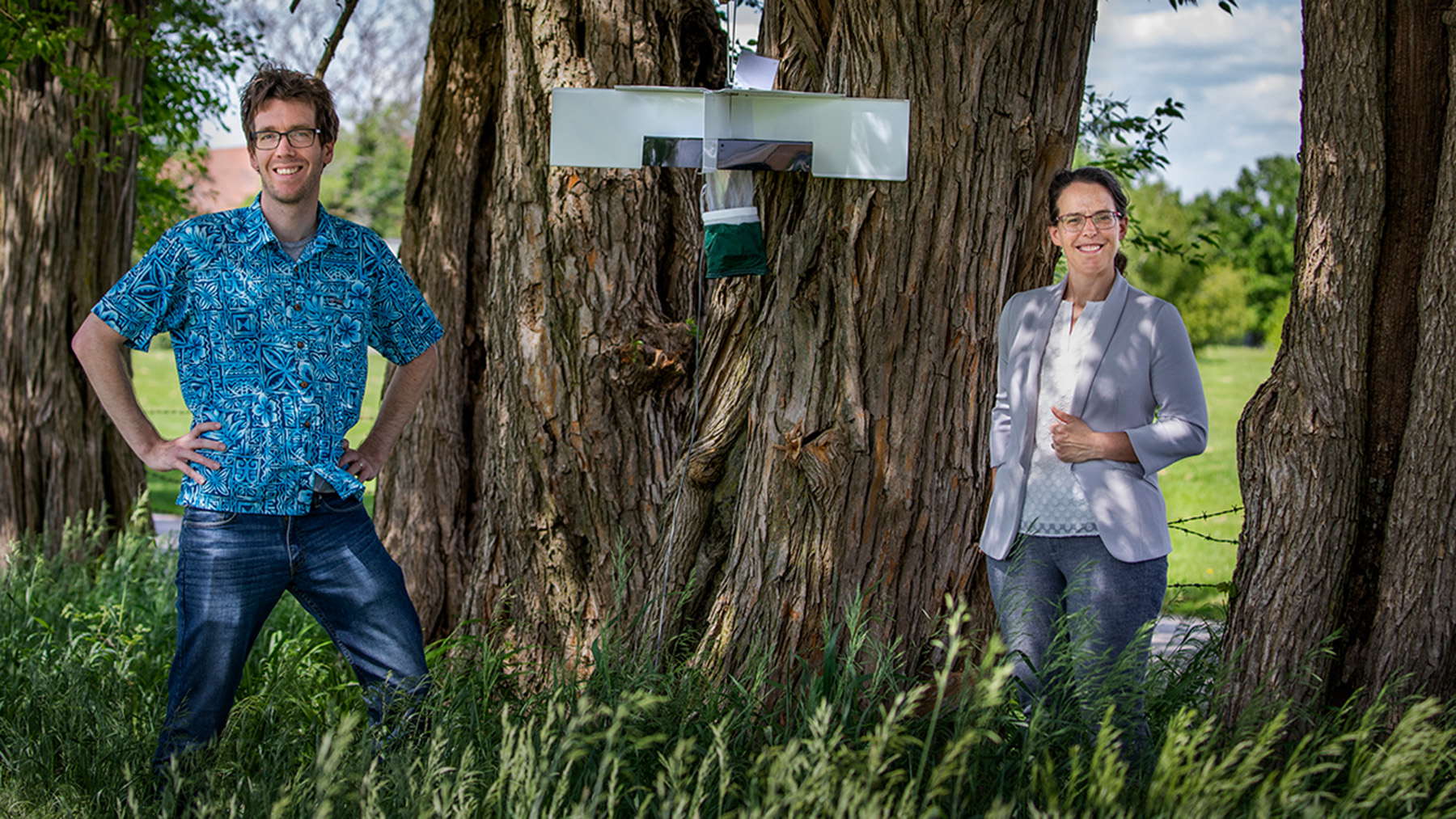 Illinois Natural History Survey medical entomologist Chris Stone, pathobiology professor Rebecca Smith and their colleagues report that the Asian tiger mosquito persists in south and central Illinois despite the state’s relatively cold winters. A mosquito trap used in their research hangs on the tree between them. Photo illustration by Fred Zwicky

Researchers report that the Asian tiger mosquito, Aedes albopictus, has become more abundant across Illinois in the past three decades.

Its spread is problematic, as the mosquito can transmit diseases – like chikungunya or dengue fever – to humans.

The Asian tiger mosquito originated in the forests of southeast Asia. It found its way to Texas around 1985 and very quickly spread to Illinois.

“The global trade in used tires facilitates the spread of the mosquito,” said Chris Stone, a medical entomologist at the Illinois Natural History Survey and the lead author of the new study. “The eggs get stuck to the walls of the tires and can survive even in dry conditions. Tires are also great at retaining rainwater, which is perfect for the larvae to develop in.”

Stone and his colleagues wanted to understand how the mosquitoes were able to spread across Illinois, given how cold the state’s winters can be.

“We looked at historical records to see where the mosquito has been observed in the state. We then compared that information to the winter temperatures in different counties,” said Rebecca Smith, a professor of pathobiology at the University of Illinois at Urbana-Champaign who led the research with Stone. “Winters are fairly warm in cities like Chicago because of all the roads and concrete. There are a lot of places like sewers and subways where these mosquitoes can live in the winter.”

The spread of the Asian tiger mosquito in Illinois also is a result of repeated introductions from neighboring counties.

“We found that there is a surprising diversity of Aedes albopictus in Illinois,” Stone said. “Some were from the Texas population, but a few had previously been found only in Japan. This observation supports the idea that we see multiple introductions of these mosquitoes from different places.”

The data was compiled from a variety of sources, the researchers said.

“We had some collections of mosquitoes from our partners in public health, and we set out some mosquito traps in counties that had not been looked at previously,” Stone said. “Unfortunately, we did not have samples that went back as far as the historical observations.”

Asian tiger mosquitoes are good at outcompeting other mosquitoes, the researchers said. This can have both beneficial and harmful effects.

“There have been studies from Florida and Texas where Aedes albopictus has displaced Aedes aegypti, a closely related mosquito known as the yellow fever mosquito that can transmit dengue and yellow fever,” Stone said. “The implications of the establishment of the Asian tiger mosquito in Illinois on other mosquito species is a topic that needs further study.”

“The ability of the Asian tiger mosquito to establish itself in Illinois could be problematic from a public health perspective,” Smith said. “Although it is not as bad as the yellow fever mosquito, it has the potential to introduce diseases.”

The researchers hope to expand the historical database of disease-carrying mosquitoes. “The biggest drawback with this study was that there are many places where mosquito surveillance has been limited,” Smith said. “We need to increase the surveillance so that we can track the spread of these mosquitoes more comprehensively and study them more intensively.”

The researchers report their findings in the Journal of Medical Entomology.

The INHS is a division of the Prairie Research Institute at the U. of I.