Cicada Killer Wasps in Search of Cicadas, Not Humans

The annual cicadas have begun to sing their song, and along with them comes the emergence of their natural predator, the cicada killer wasp. Despite their large size, these pollinating giants are not as threatening as they first seem. 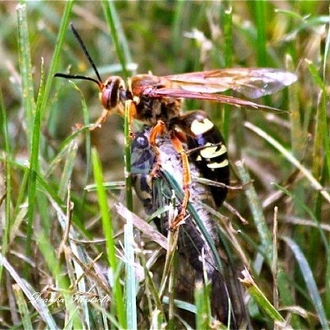 A female cicada killer wasp paralyzes the cicada, then places it in a cell for young to feed on. University of Illinois Extension photo.

Annual cicadas, also known as “dog day” cicadas, emerge in July and are starting to be heard in backyards across the Midwest. They are green and black with silvery wings. Hatched from eggs laid in the branches of trees, cicada nymphs fall to the ground and burrow into the soil.

The nymphs feed on the sap found in tree and shrub roots for two to five years. When they emerge, they build chimneys, climb up the tree, and leave as flying adults.

The singing of these annual cicadas, or deafening chorus depending on your tolerance level, alerts predators of their presence. Cicada killer wasps come out of hibernation to feast on the annual treat. The warmer temperatures signal the cicada killer wasps to emerge, says Ken Johnson, University of Illinois Extension horticulture educator, not the cicada’s sound.

Cicada killers are a native wasp species, and, as their name implies, hunt cicadas.

Cicada killers are black with yellow markings on the thorax and abdomen and can grow up to 1.5 inches. They have large, rust-colored eyes and orangish-red wings and legs.

Cicada killer wasps can sting humans if threatened, but it takes work to provoke or aggravate them. Females cicada killers can sting, but only when handled or disturbed. They do not have the instinct to protect their nests the way bees do, Allsup says. Males cannot sting, but may forcefully investigate an intruder in its territory to see if it is another male. Cicada killers dig underground tunnels after they mate. Females prefer dry, well-drained bare ground to build their nests. They then leave in search of cicadas to feed their future larvae, stopping along the way to drink nectar and water.

A female wasp will sting a cicada, injecting venom to paralyze it before carrying it back to the nest, where it is placed in a cell. The cicada killer lays eggs on the cicada before sealing the cell. The female may place up to three cicadas for one egg.

The wasp larvae hatch in a few days and begin to feed on the cicada throughout winter and spring. About a month before they leave the cell, the larvae spin a cocoon to pupate before emerging.