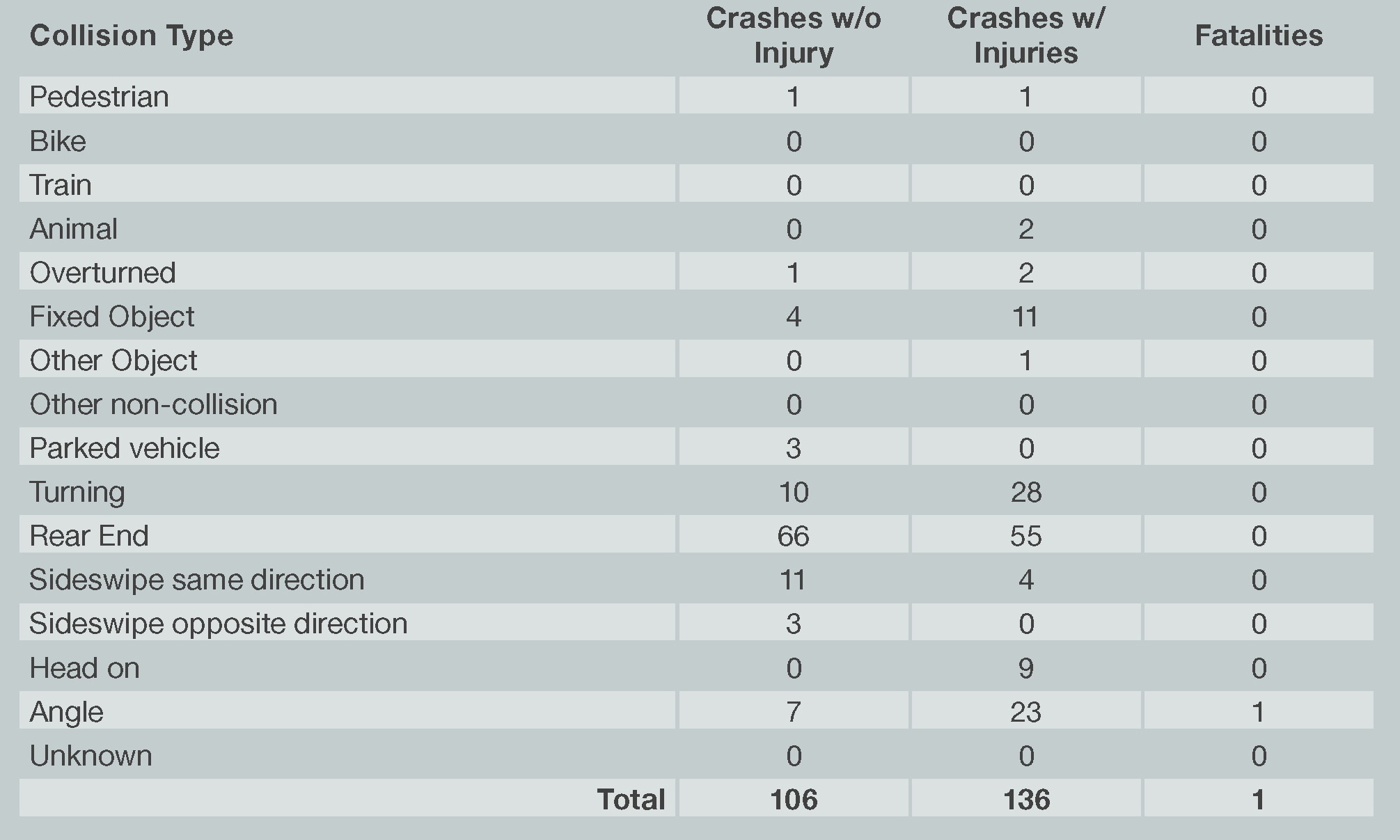 The following table is a summary of the collision types that occurred at the intersection from 2013-2016.

If you’ve ever driven on Fabyan Park or Route 31 in Batavia or Geneva, you probably are familiar with the challenges of negotiating the intersection that’s on a horizontal and slightly super-elevated curve.

Now, the Kane County Division of Transportation is hoping to do something to make that intersection more safe.

KDOT is conducting a Planning and Environmental Linkage analysis to evaluate potential improvements to the intersection of Fabyan Parkway and IL Route 31. KDOT will present a public update via a live virtual public information meeting where potential improvement alternatives will be discussed and public feedback will be gathered.

The live virtual public information meeting will be held from 6 p.m. to 8 p.m. Tuesday, July 13.

The most recent update of Zoom (5.6.6) is needed to participate in the meeting.

A link to this live virtual event will be made available on the project website at www.FabyanIL31Intersection.com

The public is encouraged to participate in the meeting. All virtual public meeting materials will be available on the project website starting on July 13, 2021. These materials will include a recording of the presentation. Participants are encouraged to submit questions and provide comments via the project website at www.FabyanIL31Intersection.com

Public input is an important part of project analysis and is one of the factors that KDOT considers as the project moves forward. Comments must be received by August 13, 2021 to be included in the official meeting documentation.

This meeting will be accessible to individuals with disabilities. Anyone requiring assistance can contact Jack Melhuish, PE at 815-759-8342.

Fabyan Parkway, bordered by the communities of Geneva and Batavia, crosses the Fox River between IL Route 31 and IL Route 25. Through the Fabyan Parkway intersection, IL Route 31 is on a horizontal curve that is slightly super-elevated. While the west leg of Fabyan Parkway is nearly perpendicular to IL Route 31, the east leg is angled at approximately 68 degrees.

This severe skew creates an uncomfortable maneuver for through and turning traffic on Fabyan Parkway.

There are two through lanes in each direction and single left-turn lanes on all four legs. There are no right-turn lanes despite the heavy traffic volumes, which is a contributing factor to the intersection’s congestion. The Fabyan Parkway Trail crosses the south leg and connects to the Fox River trail within the Fabyan Forest Preserve. Sidewalk exists along the west side of IL 31 north and south of the intersection, though there is no crosswalk on the west leg.

The existing traffic signal has video detection and protected, plus permitted, left-turn lanes which provides for an exclusive phase for left-turns and a permissive phase during which left-turns can be made if gaps in opposing through traffic allow. There is a pan-tilt-zoom (PTZ) camera on the combination mast arm in the southwest corner that allows KDOT to review high quality real time video and still images over the internet of the intersection.

There is intersection lighting in all four corners, which is separated from the bridge lighting system to the east. The other three legs do not have approach lighting.

The west end of the bridge carrying Fabyan Parkway over the Fox River is only about 400 feet from the westbound stop bar at IL Route 31.

‍‍The Fabyan Forest Preserve, which is under the jurisdiction of the Kane County Forest Preserve District, lies between IL Route 31 and the Fox River.

‍‍The Campana building and property in the northwest quadrant is listed on the National Register of Historic Places and has seen proposals for redevelopment.

Video Detection: Video cameras mounted to the traffic signal post that utilize a grid type system to detect the presence of vehicles which triggers a change in the signal phase.

Combination Mast Arm: Traffic signal posts at an intersection that have both a cantilevered arm with signals heads on it and an arm with roadway lighting.

Fabyan Parkway, bordered by the communities of Geneva and Batavia, crosses the Fox River between IL Route 31 and IL Route 25. The west leg of Fabyan Parkway is nearly perpendicular to IL 31 while the east leg is angled at approximately 68 degrees.

The resulting alignment causes an uncomfortable maneuver for through and turning traffic on Fabyan Parkway leading to a high amount of Turning and Rear End type crashes. Kane County DOT proposes to study the intersection and review potential improvements that will improve safety and alleviate congestion.