In February 2020, Americans experienced, unbeknownst to us, our last normal month before the COVID-19 virus erupted across the globe. At the very beginning, it was unclear to everyone just how long this pandemic would last. No one knew yet just how much our society would change as a result.

At first, our biggest crisis was securing necessities from grocery stores. For a few weeks, it was almost impossible to find toilet paper, hand sanitizer, and hand soap as stockpiles and production lines struggled to keep up with demand. But then we were faced with the more important, scarier crisis: how do we protect ourselves against a virus that we have no vaccine for?

Living through a situation such as this is not something most of us have ever experienced, and certainly not at this scale.  A virus over which we have little control is a scary reality. According to the Centers for Disease Control and Prevention, keeping socially distanced, wearing masks, washing your hands, and eliminating physical contact with other people are viable ways to help prevent the spread of COVID-19.

While these safety measures seem easy enough to follow, they have proven to be difficult for some. Not being able to see friends and family; having to wear a mask all day at work; making sure you are at least 6 feet away from other people; and arguably the hardest of all was not being able to do anything on account of everything shutting down.

All these elements have made 2020 a year that we will never forget. 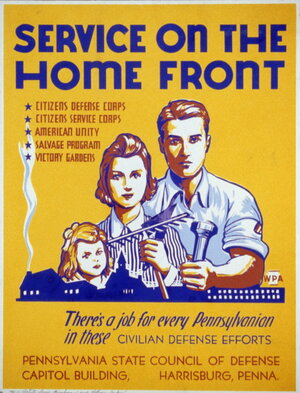 A World War II Poster Promoting Service on the Homefront.

These sacrifices are ones we all must make every day to protect our fellow citizens and our community. The concept of “community” is truly at the forefront of this crisis. We are all affected by this pandemic. While this might be the first pandemic our generation has ever witnessed, it is not the first time our community and our nation has had to come together to support a greater cause.

In 1941, when the United States entered World War II, sending troops overseas was the main contribution that our country made to support the war. But what about at home? The financial and material costs of supporting armies on opposite sides of the globe would be astonishing. To achieve victory over the Axis forces, a lot of work was required here at home as much as it was required overseas.

Some of these efforts were optional, but others were mandatory. Because of war production, there was a global shortage of certain resources like, rubber, gasoline, nylon, and food. These commodities were just as essential for everyday life during the 1940s as they are today.

Here in St. Charles, Victory Gardens were one of the most common efforts made by citizens to support the war effort.

The national program was initiated by Lester J. Norris, who served as the chairman of the Victory Gardens committee of the Illinois State Council of Defense. Norris strongly encouraged Illinois amateur gardeners to use every patch of land possible for Victory Gardens so that food could be placed on family dinner tables and alleviate the general food shortage.

This was not asked of commercial farmers, but of everyday people who might not have originally liked gardening or even knew how to garden. But despite that, there were reports that St. Charles grew at least 300 Victory Gardens!

Another modern necessity that was rationed during WWII was coffee. Could you imagine having to ration your coffee during 2020? In 1943, St. Charles residents had already been rationing coffee since November 1942. By June 1943, it was decided to increase the rationing to one pound for the first three weeks in July, which had been the largest allowance of coffee since November.

Gasoline was also heavily rationed on the home front. In July 1942, not only was gasoline rationed, but travel mileage was strictly limited as well to save fuel. 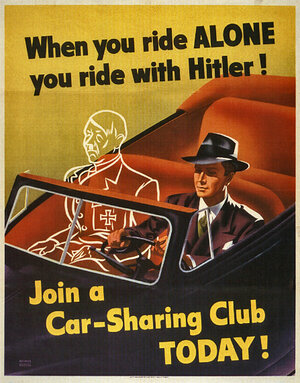 Tourists were subjected to rationed gas as soon as they entered a rationed area. They were required to visit the nearest rationing board for an “A” ration card to use on their vacation. They were not permitted to obtain a second one. Travel restrictions were some of the most common steps taken to limit the spread of COVID-19 earlier this year.

Nylons were rationed to make parachutes for the war, so women would draw panty-hose seams down the backs of their legs to make it look like they were wearing real nylons. Women were also encouraged to mend and re-purpose as much of their clothing as possible to save on fabric and textiles. It was also asked of women to work in factories that manufactured war supplies.

So much of every day life was altered for not just one year, but for four years. Efforts made on the home front not only supported the troops overseas, but it kept morale up and strengthened the resolve of what would be known as the “greatest generation.”

Will 2020 yield the same resolve in the generations to come? It is important that everyone pitches in and does their part, so that we can beat this virus and return to our normal lives as soon as possible. St. Charles residents have proven time and time again that when they come together, they can overcome anything.

As always during these difficult times, we remind you to support your local small businesses. They have been there through thick and thin for us, and its time for us to be there for them! 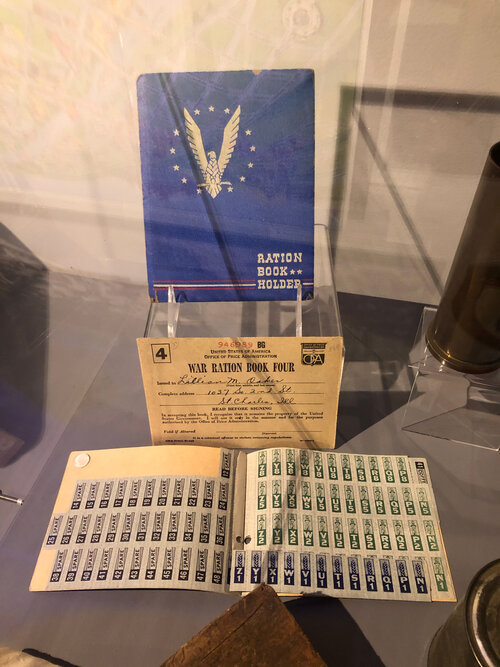 A pair of ration books issued to St. Charles resident Lillian Oakes during World War II on display at the St. Charles History Museum . These books were commonly used to limit the amount of food and resources consumed during the war to help support soldiers on the front lines. 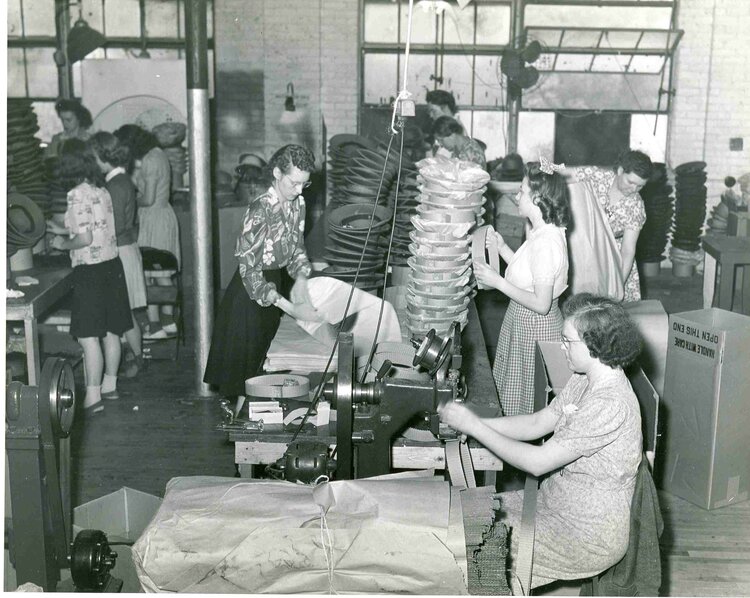 Women assembling pith helmets at St. Charles’ Newcombe-Hawley plant off of 6th street, c. 1943. 20,000 helmets a day were manufactured there during World War II, meriting it as one of St. Charles’ largest contributors to the war effort, along with Howell Manufacturing. (SCHM Archives)