The U.S. Department of Energy has formally approved the scope, schedule and cost of the PIP-II project at DOE’s Fermilab.

The approval, known as Critical Decision 2 or CD-2, is an endorsement of Fermilab’s detailed, formal plan for building the PIP-II accelerator, a high-power, superconducting machine that will become the heart of the laboratory accelerator complex.

PIP-II, the only particle accelerator project in the United States with significant contributions from international partners, will send megawatt-scale proton beams — 60% higher than what Fermilab currently provides — to the lab’s experiments. The high beam power is especially important for the international Deep Underground Neutrino Experiment, hosted by Fermilab, where scientists will study difficult-to-detect subatomic particles called neutrinos, which could provide clues about the evolution of the universe. PIP-II’s powerful beams will provide researchers with an abundance of these mysterious particles to study for decades to come. 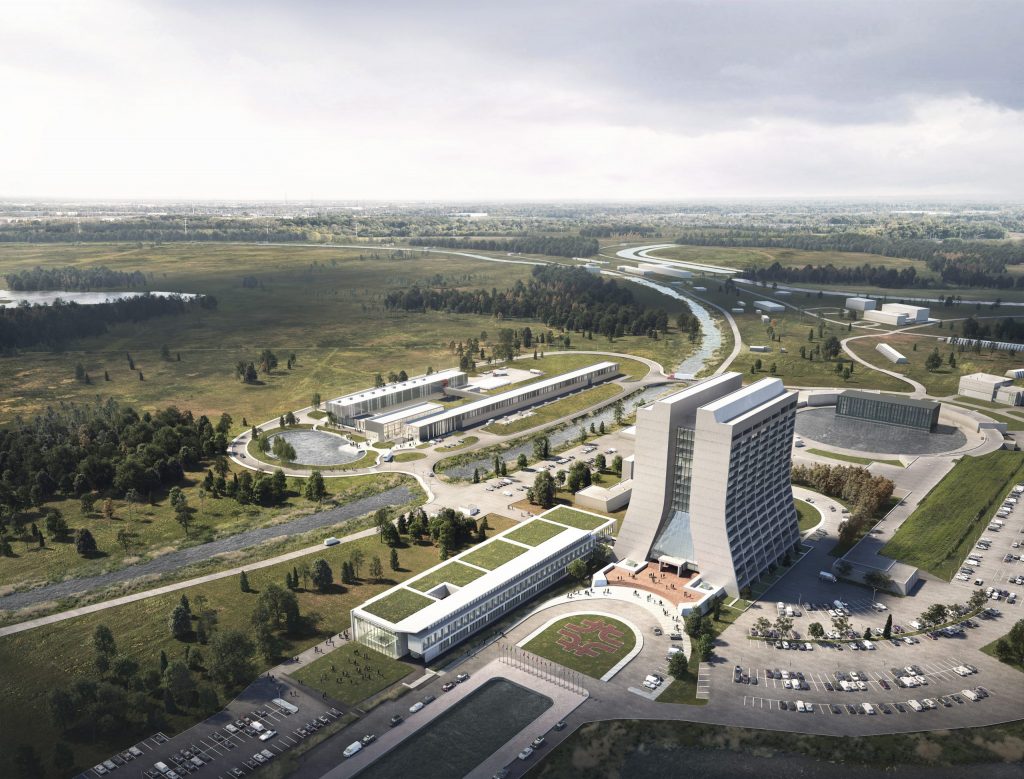 The PIP-II project received CD-2 approval from the U.S. Department of Energy this month. When complete, it will provide more powerful beams of protons to Fermilab experiments. This rendering shows the site of the PIP-II complex, just above and to the left of the 15-story Wilson Hall. Image: Fermilab

The PIP-II team designed the program to be versatile, capable of providing customized proton beams to multiple experiments and thus serving a broad range of particle physics research.

“This major approval milestone is the culmination of years of hard work by a large group of excellent people across 11.5 time zones,” said PIP-II Project Director Lia Merminga of Fermilab. “It is tremendously gratifying to see their efforts being recognized and thrilling to dream about all the great science PIP-II will enable.”

The centerpiece of the PIP-II project is its superconducting linear accelerator. As the proton beam bolts down its 215-meter length, it picks up energy until it reaches 800 million electronvolts, about 84% of the speed of light. It then hands off the beam to the next accelerator in the lab’s accelerator chain or to one of the lab’s experiments.

“Fermilab and its partners are building a state-of-the-art machine with PIP-II that will ensure that the U.S. remains at the forefront of discovery in particle physics for decades to come,” said Chris Fall, director of DOE’s Office of Science. “By fostering international collaboration, we’re realizing the value of global partnerships in science today and for future generations.”

PIP-II institutional partners are contributing both components and expertise to the accelerator’s construction. These include institutions in France, India, Italy, Poland and the United Kingdom.

“PIP-II is a truly global scientific undertaking that will usher in a new era of research and discovery in particle physics,” said Fermilab Director Nigel Lockyer. “Every member in the international collaboration played a part in creating the PIP-II plan, and their collective efforts are what made this CD-2 approval possible. I congratulate Lia Merminga and the absolutely superb PIP-II team on this achievement.”

Fermilab is America’s premier national laboratory for particle physics and accelerator research. A U.S. Department of Energy Office of Science laboratory, Fermilab is located near Chicago, Illinois, and operated under contract by the Fermi Research Alliance LLC, a joint partnership between the University of Chicago and the Universities Research Association, Inc. Visit Fermilab’s website at www.fnal.gov and follow us on Twitter at @Fermilab.

Fermilab is supported by the Office of Science of the U.S. Department of Energy. The Office of Science is the single largest supporter of basic research in the physical sciences in the United States and is working to address some of the most pressing challenges of our time. For more information, please visit energy.gov/science.