The Geneva Police Department is urging residents to lock their car doors after several car burglaries were reported March 3 and March 4 on the city’s east side.

People are encouraged to report all suspicious activity to the Geneva Police Department immediately. The information provided may be the key to solving a crime in their neighborhood. 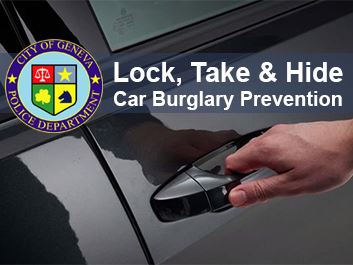 In an effort to make property less of a target, people should lock their vehicles and remove valuables (computers, phones, electronics, purses, keys, garage door openers) from the car at night.

Residents should make sure their garage door is closed, windows are secured and access doors to the garage and home are locked.

Outdoor lighting may act as a deterrent in some cases since many of these car burglaries occur under the cover of darkness.

The majority of car burglaries are crimes of opportunity and are preventable, police said.