With Veterans Day falling on a Monday this year, there are some changes worthy of note if you’d like to attend a ceremony in Kane County.

As a reminder, Kane County courts and government offices are closed to observe the holiday on Monday, Nov. 11.

Communities throughout Kane County celebrate with a variety of events and ceremonies. Below is a list of several of the most popular events, but we hope to list as many as we can and update this post frequently.

If you know of a Veterans Day event or ceremony in Kane County that’s not listed here, please email a link, photo and additional information to kanecountyconnects@gmail.com. 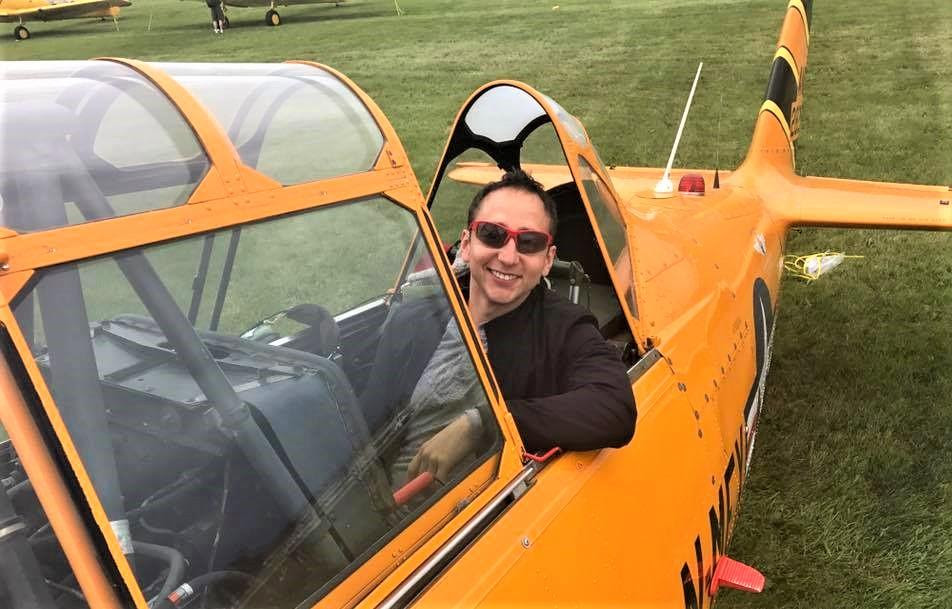 It has been 15 years since he graduated from high school, but it seems like only yesterday. Time flies. And so does he.

Rodolfo “Rudy” Rodriguez, a former United States Navy aviator, has traveled the world the last decade and a half serving his country and helping others. He will return home this weekend to speak at the annual Aurora Veterans Day Parade.

With the theme “Serving Our Country and Our Community,” the parade will step off at 10:15 a.m. on Monday, Nov. 11, from the intersection of Benton Street and Broadway Avenue in downtown Aurora.

The route will travel north on Broadway, west on Downer and conclude at the GAR Memorial, 23 E. Downer Place, where a special ceremony will feature remarks by Mayor Richard C. Irvin, a veteran of the United States Army, and other local leaders with a keynote address by Rodriguez.

Recommended to speak by the director of the Illinois Department of Veterans Affairs and Aurora resident Linda Chapa LaVia, Rodriguez graduated from East Aurora High School as valedictorian of the Class of 2004. He earned a nomination to the U.S. Naval Academy in Annapolis, MA, where he graduated with a bachelor’s degree in Systems Engineering.

Upon graduating in 2008, he was commissioned as an ensign in the United States Navy and attended flight school in Pensacola, FL.

Now an accomplished business coach and investor in emerging technologies, Rodriguez continues to travel the world contributing to the strategic success of businesses and individuals.

“I consider this a great honor to come home, salute my fellow veterans and see all of the great things happening in Aurora,” said Rodriguez.

Author and Aurora native Brent Peterson will greet the public and sign copies of his book, Once Upon A Lifetime, The Epic True Story of Corporal William Wesley Bennett, USMC,  on Nov. 11, 2019, at the Aurora Historical Society gift shop at the Pierce Art and History Center, 20 E. Downer Place.

The event will take place immediately following the Veterans Day parade which is due to step off at 10:15 am at Benton and Broadway streets and conclude at the reviewing stand in front of the GAR Memorial Museum and Pierce Art and History Center.

The city and historical society will be serving coffee and doughnuts at the Pierce Center from 9 a.m.

Copies of the book, which has been praised as one of the most detailed accounts of Marine action ever written, are available online at www.aurorahistory.net or at the gift shop. The shop will also be open Veterans Day from 9 a.m. to 1 p.m. Cost is $18 plus tax, with a 10% discount to historical society members.

The city of Elgin, in partnership with American Legion Post 57, will honor our nation’s veterans during the annual Veterans Day ceremony, scheduled to take place at 11 a.m. Monday, Nov.11, at Veterans Memorial Park, located at 270 N Grove Ave, Elgin.

All are invited to honor those who have served in the United States Armed Forces. The ceremony will feature opening remarks from Chief Ana Lalley, remarks from Mayor David Kaptain, speakers from local veterans organizations as well as several musical selections.

Limited seating will be provided; the public is welcome to bring chairs if desired. Parking is available in the Gail Borden Public Library parking lot.

Students and staff in School District U-46 will support and honor our local veterans and troops with special ceremonies, concerts, breakfasts, and assemblies during the month of November. In addition, dozens of local veterans are visiting schools across the District to talk to students about their service and their lives in a program being held in partnership with the Gail Borden Public Library.

“Being able to welcome veterans into our schools is an honor,” said Chief Executive Officer Tony Sanders. “After students hear veterans’ first-hand accounts, they are sure to gain a better understanding and appreciation of our veterans’ contributions and sacrifices, and the roles they played in American history.”

Tish Calhamer, the community engagement manager at the Gail Borden Public Library, is working with 30 volunteer veterans as part of the special program, called Veterans Voices. Veterans who may want to participate in future events are encouraged to visit gailborden.info/veterans to learn more and submit a volunteer application.

“This program draws on the power of personal stories, and reminds students that history is all around them,” said Calhamer.

Additional Veterans Day events in U-46 schools are as follows:

All veterans in the Fermilab community, including employees and retirees, students, contractors, as well as family and friends of veterans, are welcome to attend.

Korean War Veteran Sgt. Jerry Sperry of the “Chosin Few” Sgt. Sperry was a member of the US 1st Provisional Marine Brigade. Between Nov. 27 and Dec. 13, 1950, 24 United Nations Command troops (later nicknamed “The Chosin Few”) were surrounded at the Chosin Reservoir and fought their way out to the sea.

Join Huntley officials on Sunday, Nov. 10, at the Veteran’s Memorial in the Town Sqaure to honor veterans for all they have done to keep us safe and free.

This will be Huntley’s third year hosting the Honoring Our Veterans Collection Event. Help officials stock the shelves at New Horizons, a transitional living program for homeless veterans.

Volunteers will be at the Veteran’s Memorial, where you can drop off any of the following much-needed items:

Monetary donations will also be accepted to purchase fresh food and additional items.

New Horizons is owned & operated by TLS Veterans, legally known as Transitional Living Services, and is a 501(c)3 non-profit organization.

The ceremony will include a Rifle Salute by the North Aurora Honor Guard, Taps played by a Marmion Academy Bugler along with a welcome and thanks provided by our Mayor and other officials.

Lake In The Hills

The village of Lake in the Hills will host its annual Veterans Day Ceremony on Nov. 11 in the multi-purpose room at village hall, 600 Harvest Gate. The ceremony will run from 9:15 a.m. to 10 a.m.

The students of Lincoln Prairie Elementary sing patriotic songs and read poems, according to village officials.

The city of St. Charles Annual Veterans Day Ceremony will be held T 10:30 a.m. Monday, Nov. 11, at a new location: inside the new St. Charles Police Station, 1515 West Main St. All are welcome to attend.

The ceremony will begin with the singing of the National Anthem, followed by a prayer, remarks, a closing prayer, gun salute and Taps performance.

“Veterans Day is a day when we as a community gather and say ‘thank you’ to our veterans for their selfless service to our country,” said St. Charles Mayor Raymond P. Rogina. “We hope to see a large turnout at this event. At the city, we are proud of the fact that nearly 10% of our workforce is veterans. And we have been recognized for this with a Gold Medallion in the HIRE Vets program by the U.S. Department of Labor.”

The St. Charles Public Library and the St. Charles History Museum invite the community for a special presentation to honor local veterans and all those who have served our country.

Executive Director of the St. Charles History Museum Alison Costanzo will present “Honoring our Local Heroes: Veterans Day in St. Charles” from 4 p.m. to 5 p.m. Monday, Nov. 11, in the Carnegie Community Room at the library.

St. Charles has an extensive legacy of service, dating back to its days as a Civil War training ground. The city contributed supplies for both World Wars, and many local men and women served their country. The community has many unique connections to the defense of freedom, both past and present.

For more information, please visit our website at www.scpld.org or call 630-584-0076. The St. Charles Public Library is located at 1 South Sixth Ave. in St. Charles. This program is held in partnership with the St. Charles History Museum and is suitable for all ages.

Celebrate Veterans Day and honor all the men and women who have served from 11 a.m. to noon Monday, Nov. 11, at the Academic and Professional Center (APC), 110A

The commemoration will feature Tori Porter, a former Waubonsee student and Iraq War Veteran, who will be sharing her experiences in the military and her current work with veterans.

The ceremony will also include participation by West Aurora High School Air Force Junior Reserve Officer Training Corps, patriotic music from students and faculty in the Waubonsee music program and a special presentation of the MIA/POW Remembrance Ceremony.

Originated as “Armistice Day” on Nov. 11, 1919, the first anniversary of the end of World War I. Congress passed a resolution in 1926 for an annual observance, and Nov. 11 became a national holiday beginning in 1938.

Unlike Memorial Day, Veterans Day pays tribute to all American veterans — living or dead — but especially gives thanks to living veterans who served their country honorably during war or peacetime.

A lot of veterans might not realize they are eligible for discounts at small businesses and major franchises, from cash bonuses and rebates for auto purchases

Here are a few resources and links: