Algonquin Cemetery will step off at 8:30 a.m. Monday, May 27, followed by a ceremony at Riverfront Park.

A helicopter will be on display (weather permitting) at Towne Park from 8:30 a.m. to 1 p.m.

“Mr. Huss is one of the many stalwart veterans in our community whose good deeds cannot truly be measured,” said Aurora Mayor Richard C. Irvin. “His time in combat had a direct impact on his decision to serve his community when he returned home. The same thing happened to me. It is an honor to have him represent all who served and lead our annual Memorial Day Parade.”

Born and raised on Hankes Road, Huss is proud to still call the same road home seven decades later. He attended Holy Angels School and Marmion Academy before being drafted into the United States Army in the fall of 1965.

In 1966, he was deployed to Vietnam and served with the First Battalion 7th Cavalry Regiment until 1967.  After returning from Vietnam, he married his wife, Judie, in 1969. The couple celebrated their 50th anniversary earlier this year.

In 1976, the Huss’ purchased their current house, which is adjacent to Ed’s childhood home, on part of the original land his great grandfather owned.

Huss is actively involved at Village Bible Church in Aurora, assists other non-profits in the area and still meets with his Vietnam comrades annually, a meeting he has hosted at his property in Aurora.

“I am so humbled by this recognition,” said Huss as his eyes filled with tears when he was informed of his selection as grand marshal. I”t really is almost unbelievable. I’ve just always tried to do some good in my community.”

Working 12 hours a day, six days a week, the 75-year old veteran has no plans of slowing down. This summer, he begins his new service role as a Kane County Mounted Ranger.

Huss will welcome guests at a meet 0nd-greet reception on Memorial Day from 10:30 a.m. to 11:30 a.m. at the Pierce Art and History Center, 20 E. Galena Blvd. He will then join Irvin, members of the Aurora Veterans Advisory Council and past grand marshals at the pre-parade ceremony at 11:30 a.m. held at the parade review stand in front of the G.A.R. Memorial Hall, 23 E. Galena Blvd.

The 2019 Memorial Day Parade steps off at noon from the corner of Benton and River Streets.

The annual Memorial Day Parade and program is organized by the Tri-Cities VFW Post 2298 in West Dundee and takes place from 2 p.m. to 3 p.m. Sunday, May 26, at Main Street, ending at Grafelman Park.

The parade steps off at Van Buren Street in East Dundee at 2 p.m. and progresses west to Grafelman Park in West Dundee.

A program remembering fallen service men and women will follow in the gazebo at Grafelman Park.

Enjoy a Pancake Breakfast And Parade

Many 2019 Memorial Day Activities in Elgin

The Elgin Patriotic Memorial Association, in cooperation with the city of Elgin, invites the public to attend the Memorial Day events on Monday, May 27. For information, including possible weather related changes, visit elginmemorialday.org.

Mount Hope Cemetery, 8:45 a.m. 1001 Villa St. — There will be a Catholic Mass along with a combined color guard, rifle salute and the playing of Taps.

Lakewood Memorial Park, 9:15 a.m. 30W730 US 20, Elgin, IL — A service to honor those buried at Lakewood Memorial Park will be held at the cemetery’s Garden of Honor and include a combined color guard. The observance will conclude with a rifle salute and the playing of Taps. 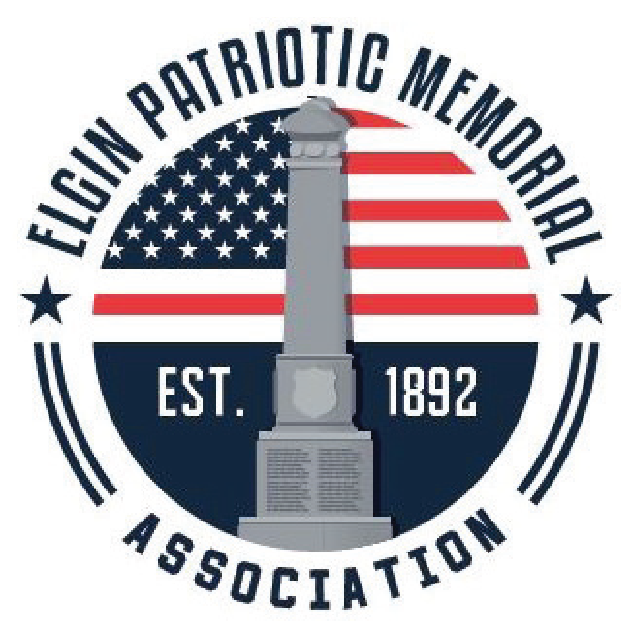 Elgin Veterans Memorial Park, 9:45 a.m. 274 N. Grove Ave. — Organized by the Elgin Navy Club and the Elgin Marine Corps League, this program is especially designed to pay tribute to veterans interred at sea.  The program will  feature the Elgin Master Chorale and a presentation by Elgin Navy Club members as well as a strewing of flowers into the Fox River, a rifle salute and the playing of Taps.

This program also include the Elgin Master Chorale and Northwest Baptist Bible Academy. Local students will continue the long-held tradition of reading Lincoln’s Gettysburg Address and General John Logan’s Orders, which established Memorial Day. A poem specific to the day will be composed and read by the City’s Poet Laureate Chasity Gunn. 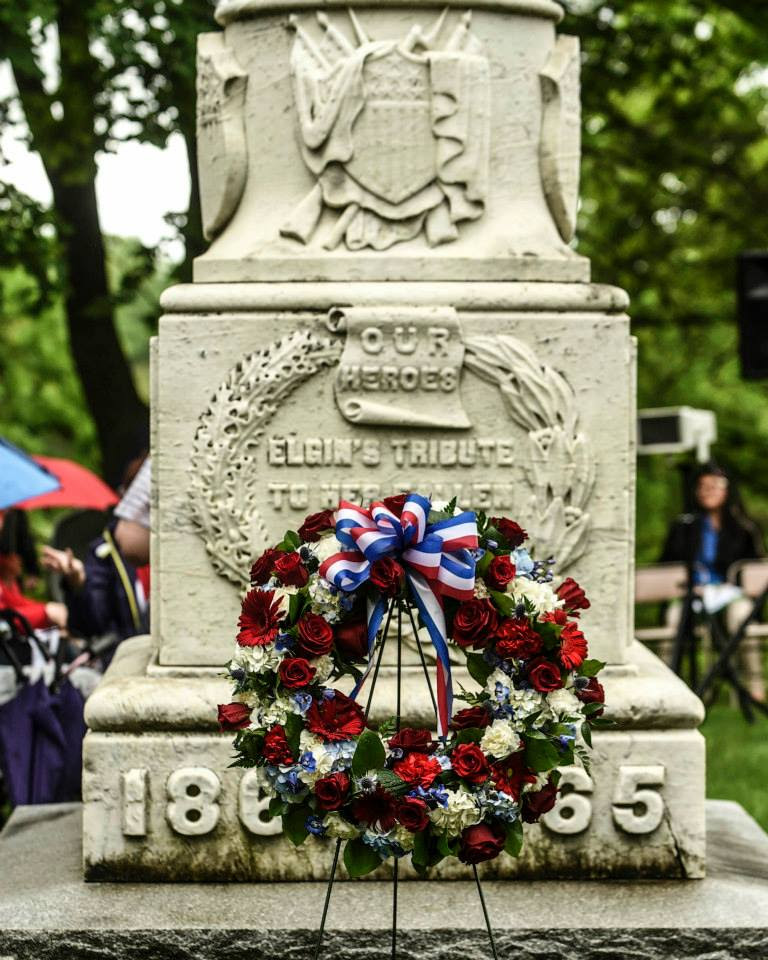 The most solemn moment of the morning will be the laying of organizational wreaths at the Grand Army of the Republic memorial — an observance akin to the laying of wreaths at the Tomb of the Unknowns in Washington D.C. Activities will include a roll call of deceased veterans, a rifle salute and the playing of Taps.

Following the program, Civil War historian Ken Gough will be on hand to help anyone wanting to learn more about many of the Civil War era graves in the cemetery.

A free shuttle bus will pick up riders at the main gate and east gate of Bluff City Cemetery before and after the service for transportation to and from the event area. Because of limited seating, attendees are encouraged to bring a lawn chair.

Should weather conditions be deemed unsuitable by City officials for outdoor programs, an announcement will be made no later than 8:30 a.m. on Memorial Day, Monday, May 28 that the Veterans Memorial Park and Bluff City Cemetary programs will be held at their normal times at the Hemmens Cultural Center located at 45 Symphony Way, Elgin.

This information will be posted on the City of Elgin website and other communication channels.

Residents are encouraged to visit local cemeteries over Memorial Day weekend. At Bluff City Cemetery, over 600 flags honoring local veterans will line the streets as part of the award winning “Avenue of Flags.” There are also over 3,000 smaller flags over veterans graves placed by local volunteers as part of the “Adopt a Cemetery” program.

For more information on these events, visit elginmemorialday.org.

Geneva residents should plan accordingly for two Memorial Day weekend events that will temporarily close streets on the city’s west side and downtown.

The Delnor Multi-Sport Madness race will be held on the hospital campus and surrounding roadways from 6:30 a.m. to 9:30 a.m. Sunday, May 26. The following streets will be shut down to traffic during the event:

Delnor Hospital’s campus, 300 Randall Road, will be accessible from Keslinger Road. The Fisher Farms subdivision, west of Fisher Drive, will be open at Keslinger, Heartland Drive and Prairieview Drive.

Geneva police officers and race officials will assist residents living east of Fisher Drive, north of Williamsburg, in leaving or entering their street. Traffic control will attempt to limit the inconvenience as much as possible, but people should expect some delays while runners and bicyclists are on the roadway.

Beginning at 10 a.m. Monday, May 27, the American Legion Fox River – Geneva Post 75 will step off its annual Memorial Day Parade from the Geneva Train Station.

The procession will travel north on Third Street to the West Side Cemetery, Third and Stevens streets, where a Memorial Day ceremony will be held.

Third Street will be closed during the parade as will the intersection of State and Third streets. While the parade is short in duration, motorists are encouraged to use Route 31 as an alternate route.

The Geneva Police Department appreciates the public’s patience and hopes everyone has a safe and enjoyable Memorial Day weekend.

MEMORIAL DAY PANCAKE BREAKFAST — While in Geneva, don’t forget the United Methodist Church Memorial Day pancake breakfast from 7 a.m. to 11 a.m. Monday, May 27, at the corner of South Third and Hamilton streets.

Come honor those that paid the ultimate sacrifice and those that have served our country at this year’s Memorial Day Parade.

The parade kicks off from the Municipal Complex at 11 a.m. and travels west on Main Street to the Town Square. At the end of the parade there will be a short ceremony and then all are invited into the Legion Hall for a free sandwich.

Every year, members of the Roosevelt-Aurora American Legion Post 84 visit four cemeteries to pay respects to the fallen veterans of the community. The members meet at the following:

The Roosevelt – Aurora American Legion Post 84 visit four cemeteries to pay respects to the fallen veterans of our community.  The members meet at the following:

The Roosevelt – Aurora American Legion Post 84 participates in the Aurora parade. The city of Aurora annually remembers and honors all the men and women who made the ultimate sacrifice in defense of our country while serving in the United States Armed Forces.  Come and show your appreciation and support by participating in the parade.

Come out to show respect for our troops who have given their lives in service to our country and thank our local veterans at the St. Charles Memorial Day events Monday, May 27. Activities begin at 6 a.m. and include cemetery ceremonies, a parade, and a memorial service.

“There are more than 20,000 veterans in Kane County,” said St. Charles Mayor Ray Rogina. “We always have a tremendous outpouring of community support for our servicemen and women at our Memorial Day events and look forward to seeing everyone once again as we recognize all those who have served our nation.”

The parade steps off at 6th and Main streets, and continues to Riverside Ave. Groups that want to march in the parade, please download and submit a registration form.

This spreadsheet of events was compiled by the Veterans Assistance Commission of Kane County.