The city flag at Geneva City Hall has been lowered to half-staff to honor the life and contributions of former City Attorney Thomas G. McCracken. 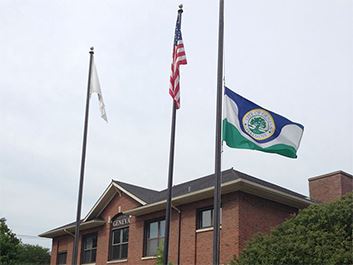 After serving in the U.S. Army Air Corps as a navigator during World War II, Mr. McCracken moved to Geneva in 1958. He was the attorney for the City of Geneva between 1963 and 1973.

Among his personal accomplishments, he was instrumental in the establishment of the city’s Mental Health Board.

His obituary can be found posted online.

Thomas G. McCracken, attorney and area resident for more than 60 years, died April 29 at the age of 94.

He was born April 21, 1925, in New Hampton, IO, to Lydia and Robert McCracken, and grew up on the family farm there with his brother, Robert Jr.

Drafted during World War II, he served in the Army Air Corps as a navigator. When he returned to Iowa after the war, he finished his undergraduate and law degrees at the University of Iowa. There he met fellow student Marcia Bogaard whom he married in 1950. He remained an avid supporter of the University of Iowa throughout his life.

After several years as an FBI special agent on the East Coast, he returned to the Midwest with his family.

They moved to Geneva in 1958 and he established himself as a respected lawyer specializing in zoning and real estate matters. He was the city attorney for the city of Geneva from 1963 to 1973 and joined the law firm of Drendel, Schanlaber, Horwitz, Tatnall & McCracken in 1989.

Among his personal and professional accomplishments: He was instrumental in the establishment, and an early chairman, of the city of Geneva 708 Mental Health Board, an organization devoted to mental health issues; he was past president of the Kane County Bar Association; he served as a commissioner with the Fair Employment Practices Commission (now known as the Illinois Human Rights Commission).

For several years he was a trustee of the Delnor Community Hospital Board; a board member of the First National Bank of Geneva for 29 years (now U.S. Bank); case manager at Rush Presbyterian St. Luke’s Multidisciplinary Assessment Program; and a frequent overnight volunteer at both Hesed House and Lazarus House.

McCracken is survived by his daughters, Ann McCracken (Bruce McColm) and Kate McCracken (Randy Lindenberg), and his son, David Badzin, and by three grandchildren, Dana Lindenberg, Hannah Lindenberg and Ian McColm. He is also survived by several cousins, nieces and nephews throughout the U.S. He was preceded in death by his wife in 2017.

In lieu of flowers, the family requests donations be made in Tom McCracken’s name to Lazarus House, 214 Walnut Street, St. Charles, Illinois 60174 or on-line at www.lazarushouse.net. Plans for a celebration of Tom McCracken’s life are pending.

← Kane County History: What Is That Thing in Downtown St. Charles?
Police: Man Charged With Unlawful Use of Weapon After Threatening Co-Worker →