During the second week of October, the city of Elgin installed Downtown Commercial Historic District signs throughout the downtown historic district.

The design of the signs resulted from a unique competition hosted by the Elgin Heritage Commission and the Downtown Neighborhood Association’s Design Committee. Beginning in November 2017, entrants were sought to create signage designs to represent the Elgin Downtown Commercial Historic District. 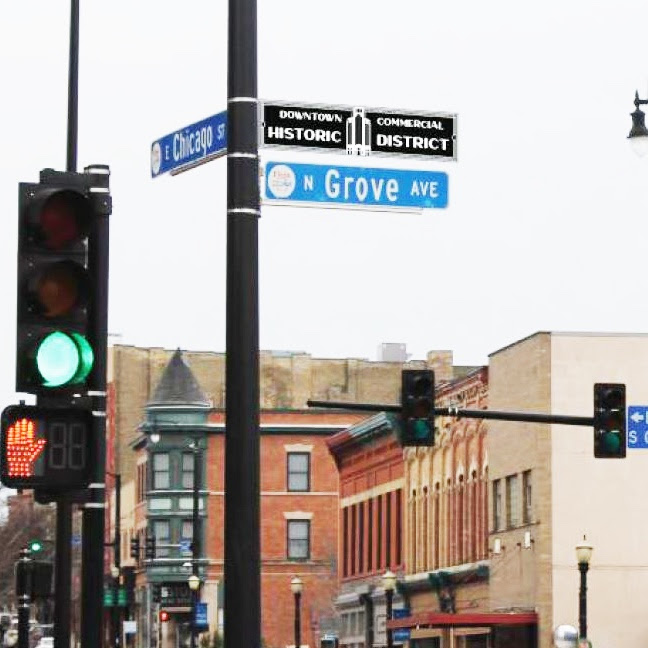 Elgin Heritage Commission Chairman, John Wiedmeyer, noted that Elgin’s Downtown Commercial District is significant due to its association with commercial and business development between 1873 and 1964.

From early shops of the late 19th century, to the arrival of department and chain stores in the early to mid-20th century, this grouping of historic structures served as the first major business center of the community.

Due to this significance, the Elgin Downtown Commercial District was added to the National Register of Historic Places in 2015.

To celebrate this accomplishment, this sign design competition was created to not only provide historic signage to the district but to get residents excited about Elgin’s history. At the close of the competition, 18 entries were submitted. Each design was unique, intriguing and clearly showed civic pride.

Of the 18, three designs were recognized at the annual Mayor’s Awards for Preservation held on May 1, 2018. The two runners up included Brandon Couture and Darnesha Williamson. The grand prize winner and the design that was selected as a representation of the Downtown Commercial Historic District went to Michael Zimmer.

For more information or to obtain a nomination form, please contact Christen Sundquist at 847-931-6004 or sundquist_c@cityofelgin.org.

About The Elgin Heritage Commission

The Elgin Heritage Commission is a citizen’s advisory commission that promotes Elgin’s historic preservation activity through the protection, maintenance and preservation of the city’s architectural, historic and cultural resources.

The Elgin Heritage Commission is composed of nine voting members appointed by the mayor with the consent of the Elgin City Council.

About The Downtown Neighborhood Association

Nestled along the banks of the Fox River, Elgin, Illinois is approximately 38 miles northwest of downtown Chicago and is home to over 110,000 people. The growing city enjoys ready access to public transportation, diverse housing stock and a mix of commercial establishments.

Many national and international businesses have taken advantage of Elgin’s close proximity to the Elgin-O’Hare Tollway and to the “Golden Corridor of Technology and Commerce” along Interstate-90. A recent recipient of the Governor’s Hometown Award, Elgin features a nationally acclaimed library system, an array of healthcare options, and educational opportunities for all ages.

Residents and visitors enjoy a thriving cultural arts community, world-class parks, historical museums and over 200 places of worship. This vibrant, diverse community is a registered Cities of Service to recognize its volunteer-rich community and history of civic engagement.