Geneva High School students will celebrate Homecoming with their traditional parade Friday, Sept. 14, that will require several streets to be closed to motorists. 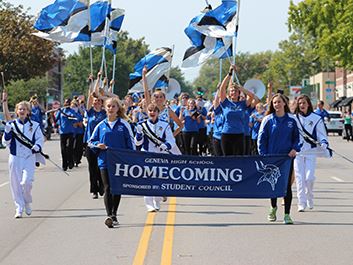 State Street (IL Route 38) between Third and Ninth streets will be shut down at 2 p.m. to accommodate the event. All streets listed on the parade route also will be closed to traffic:

A detour route will direct motorists traveling eastbound on State Street to turn south on Ninth Street, east on James Street, north on Third Street and back east on State Street. The directions will be reversed for westbound traffic.

Police officers will be providing traffic control, but motorists should use caution when driving through the downtown due to the large crowd anticipated to attend the parade. The streets are expected to be reopened to drivers after 3:30 p.m.