Wounded Warrior Project will provide $45 million to Rush University Medical Center to substantially grow its Road Home Program, allowing an expected 5,000 military veterans or their family members — including many in Kane County — to receive mental health care services without cost to them over the next five years.

The grant, the largest single donation to Rush since its founding in 1837, will expand a WWP-funded program that provides three weeks of concentrated post-traumatic stress disorder treatment that has been proven to significantly reduce PTSD symptoms.

“This is a transformational commitment from Wounded Warrior Project that will expand assistance to many more veterans and their families who so badly need and richly deserve these services,” said Dr. Larry Goodman, CEO of Rush University Medical Center and the Rush System, which includes Rush Copley Medical Center in Aurora. “We are honored by this extraordinary commitment and the trust it shows in Rush and the Road Home Program.”

“This is good news,” he said. “We have been familiar with Rush’s Traumatic Brain Injury program for veterans for three or so years now. We know of some folks who received some very good treatment who really were struggling with those injuries.

“As for the money, historically the folks who I know who have used the TBI program have had to go to their Chicago location to get that treatment but maybe this will change that.”

The Road Home Program at Rush was launched in 2014 to help military veterans and their families make healthier transitions to civilian life by offering specialized mental health care, regardless of the ability to pay. In 2016, WWP, Rush, Emory Healthcare in Atlanta, Massachusetts General Hospital in Boston and UCLA Health in Los Angeles collaborated to create Warrior Care Network, a national care network that provides comprehensive mental health care to veterans living with PTSD, traumatic brain injury, and other related conditions.

As part of that effort, WWP provided a $15M grant for Rush to help support its treatment programs, including development of a three week long Intensive Outpatient Program.

In the IOP, as it’s known for short, groups of eight to 12 veterans from across the country whose PTSD is not responding to standard treatment receive more than 100 hours of treatment, which includes cognitive processing therapy and wellness interventions such as mindfulness, yoga, art therapy and acupuncture.

More than 260 veterans have completed IOP therapy to date, and Rush researchers have documented rapid and clinically meaningful reductions in PTSD and depression symptoms for the great majority of them.

The new funding announced today will make the IOP available to more than 1,500 veterans over the next five years. In addition to the IOP expansion, the new funding also will enable Road Home Program clinicians and therapists to provide outpatient therapy, counseling and other services to an additional 3,500 veterans and their family members from the Chicago area and elsewhere.

Because spouses, children and other family members suffer as well when their loved one suffers from a trauma-based mental health issue, RHP provides free services to family members, as well.

“The Road Home Program at Rush has proven to be just that — a road home for thousands of men and women wounded while serving their country,” said retired Lt. Gen. Mike Linnington, Wounded Warrior Project’s CEO. “Wounded Warrior Project has increasingly focused on improving the mental health and wellness of our veterans. Invisible wounds are as debilitating as physical injuries, but with care like that provided at Road Home, they can be largely overcome.”

As many as one in three veterans who served in the conflicts in Iraq and Afghanistan have returned to the United States with what are called the “invisible wounds of war,” including PTSD, traumatic brain injury, and related mental health conditions associated with their military service.

“It is critical that the general health care system step up to do its share to care for our servicemen and women, and their families, who have given so much for our country. This support and generosity from Wounded Warrior Project is enabling us at Rush to provide the cutting-edge care and services that our warriors and their families so dearly earned,” said Dr. Mark Pollack, professor and chairperson of the Rush Department of Psychiatry and founding director of the Road Home Program. 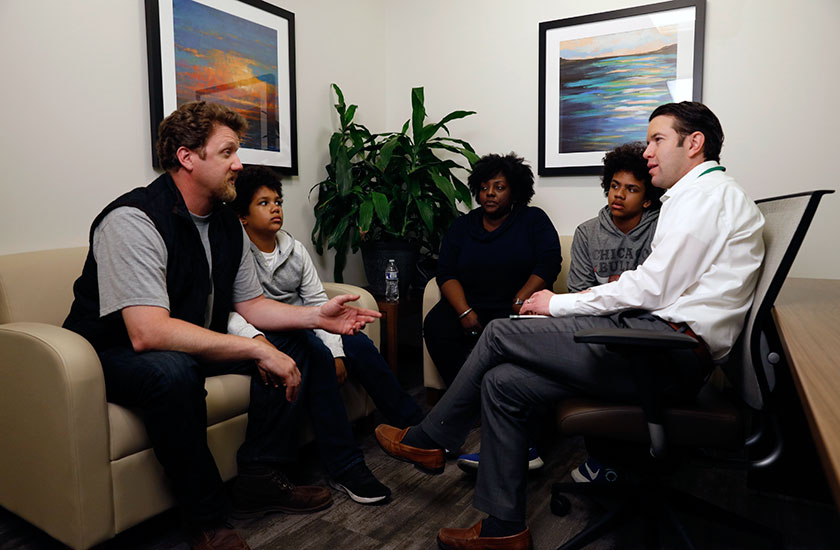 The care, provided at no cost to the veteran and his or her family, helps fill in the gaps in mental health care currently not provided by VA or to those veterans who are not eligible or prefer to not receive care through the VA. Rush coordinates continuing care with the VA, working with a VA liaison so the veterans can continue to get treatment inside or outside of VA.

More than 1,000 people have received care from the Road Home Program since it was established to help military veterans and their families make healthier transitions to civilian life by offering specialized mental health care, peer-to-peer outreach, counseling and community resource navigation.

The WWP grant brings the total dollar amount of gifts made to Rush for the current fiscal year to nearly $86 million overall, making fiscal year 2018 the most successful year for fundraising in Rush’s history. The previous record for donations in a single year was $75.2 million in 2005. The past two largest gifts made to Rush were $20 million each.