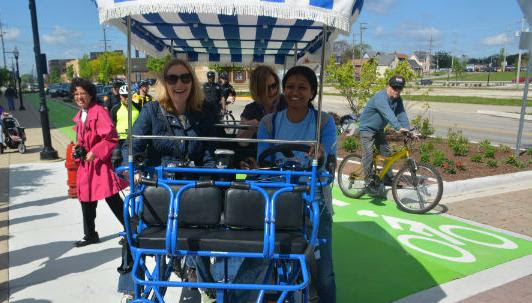 PeopleForBikes worked with industry experts to review the country’s newest bike lanes, with an extra emphasis on those that helped to connect bike grids in their respective communities.

Aurora ranked fourth in the national review. Other cities in the top five include New York City (5), Tallahassee (3), Chicago (2) and Seattle (1).

“Chicago has nothing like the Fox River Trail that runs through the western collar counties,” said PeopleForBikes. “For years, the only flaw in the trail’s 60-mile span has been a one-mile gap near central Aurora – until last spring, that is, when the city unveiled a new one-mile curb-protected bike lane that brought everything together, complete with green paint and bike-only signals.”

Recently, the League of American Bicyclists also recognized the City of Aurora and its efforts to become friendlier to cyclists with the Bicycle-Friendly Community Bronze designation. In earning the Bicycle Friendly Community Bronze designation, the City of Aurora joins a select few cities that have proven their dedication to cycling.

“We are very pleased at the recognition afforded to the City of Aurora for our ongoing efforts in developing a bike-friendly community,” Mayor Robert J. O’Connor said. “As our city looks to the future, we will continue research, propose and implement new ways to build our cycling infrastructure, which in turn, bring great returns in the health and the quality of life for our residents.”

ABOUT PEOPLE FOR BIKES

Launched in 1999 PeopleForBikes is a national membership organization founded by bicycle industry leader and includes an industry coalition of bicycling suppliers and retailers, as well as a charitable foundation. Over the years, PeopleForBikes has spent more than $30 million to make bicycling better and to ensure safer places to ride for both children and adults.. PeopleForBikes aims to make riding better for everyone.

← U of I Extension: Protect Your Valentine’s Heart With Dark Chocolate
In the Courts: 50 Years in Decades-Old Murder, Synthetic Drugs Conviction →