First, Cross just last week was promoted to the position of commander, one of the top leadership posts in the department. Now comes news that he will be named 2016 Outstanding African-American of the Year by the city of Aurora’s African-American Heritage Advisory Board at the 12th Annual Heritage Dinner, set for 7 p.m. Friday, Feb. 26, at Gaslite Manor, 2485 Church Road, in Aurora. Social hour for the event begins at 6 p.m. 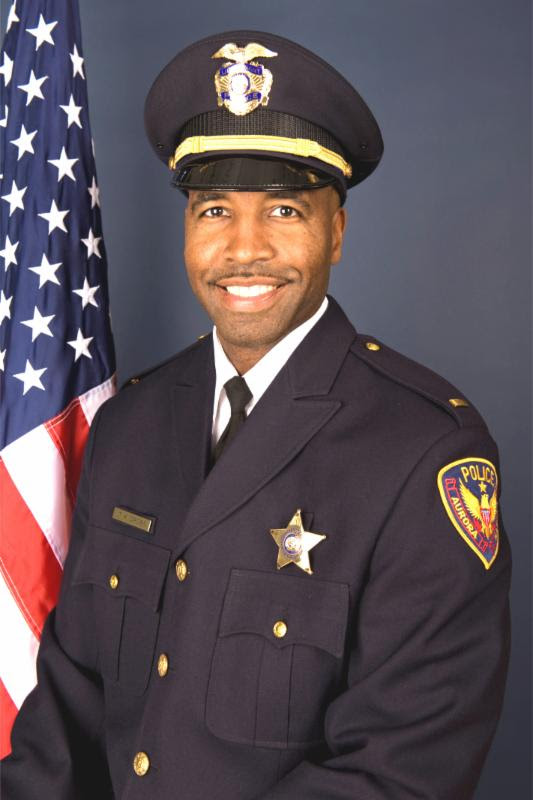 The Heritage Dinner is the crowning event of Black History Month and focuses on young achievers who are succeeding at school and in the community.

A graduate of East Aurora High School, Lt. Keith Cross has been a sworn officer of the Aurora Police Department for nearly 22 years. After joining the APD in 1994, Cross served in a number of positions, including a Community Oriented Police Officer, a School Resource Officer, and a DARE / GREAT instructor. More than two decades later, it is common to hear Cross’ former students speak about how he helped to change the trajectory of their lives.

In 2005, Cross was promoted to sergeant. In 2008, he was promoted to his current position as lieutenant. His promotion to commander was announced last week by newly appointment Aurora Police Chief Kristen Ziman.

Known for his consistent encouragement to others and a firm commitment to excellence, Cross has been a leader in law enforcement and in the greater Aurora community.  He has served as the leader of the APD Honor Guard, Coordinator of the APD Crisis Hostage Negotiator Team and President of the National Organization of Black Law Enforcement Executives – Northern Illinois Chapter, where he has joined forces with other law enforcement agencies to facilitate workshops that strengthen police and community relations. In addition, he co-coordinated the 1st West Aurora Boys Basketball Feeder Program and has mentored and coach hundreds of children in the Fox Valley area.

“We are so honored to recognize Lt. Cross this year,” said Patricia Holt, AAHAB chairwoman. “He is a great example of what our Aurora youth can become with hard work and dedication. He is an officer and a gentleman.”

Tickets are $50 each, with a portion going to the Henry Cowherd Scholarship Fund. Tickets can be purchased online beginning today, Feb. 1, 2016, at www.aurora-il.org/heritagedinner, by calling 630-256-3402, or emailing MyAurora@aurora-il.org.

About the African American Heritage Advisory Board

For meeting agendas and minutes, please view the Agendas and Minutes Archive.

About the City of Aurora, IL

Located 35 miles west of Chicago, Aurora is the second largest city in Illinois with a population of 200,456. Aurora is known as the “City of Lights” because it was one of the first in the nation to illuminate its streets with electric lights.  Situated along the Fox River and the Ronald Reagan Memorial Tollway (Interstate 88), the city extends 46 square miles encompassing Kane, DuPage, Kendall and Will counties.  Aurora also is home to six public school districts and seven townships. For the latest news, access to an archive of past news releases or to follow the city on Facebook or Twitter, visit the city’s website at www.aurora-il.org.