New Gallup Poll Says Half of Illinoisans Want to Move Away — How Would You Answer? 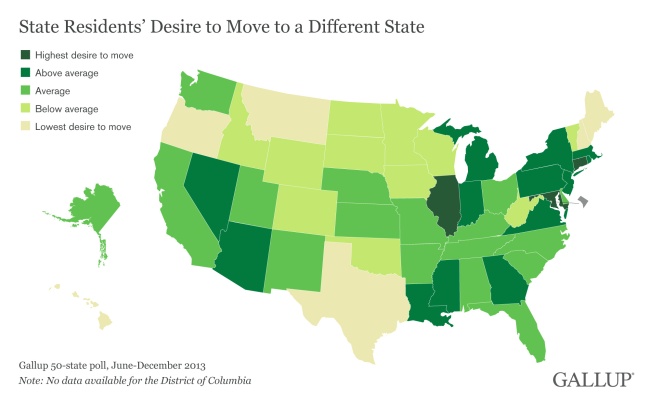 A new Gallup poll contains a revelation that’s not-so-complimentary about our great state of Illinois.

The poll says a whopping 50 percent of people in Illinois would leave here if they could. That’s the highest percentage in the nation, putting the state as league leader in residential dissatisfaction.

The question asked by Gallup was this: “Regardless of whether you will move, if you had the opportunity, would you like to move to another state, or would you rather remain in your current state?”

According to Gallup, work or business reasons was the biggest factor in determining “should I stay or should I go.” The story says 31 percent, on average for all 50 states, list work of business as reason No. 1. That’s followed by family or other social reasons (19%), weather or location (11%), and then seeking a better quality of life or change (9%).

Illinois also was near the top of the list of states with largest populations planning to move in the next six months. About 19 percent said they were extremely/very/somewhat likely to “get out of Dodge” in 2014.

The Gallup data suggests an interesting followup: What would people of Kane County say to the same question?

Here’s your chance to respond:

Please keep in mind that this is an unscientific poll. Its an interesting exercise and an interesting experiment for KC Connects in terms of testing this WordPress feature and seeing if people are interested enough to participate. In my experience, polls like these can be fun and engaging, but their results should always be taken with more than just a grain of salt.

By comparison, results for the Gallup poll were based on telephone interviews conducted June-December 2013, with a random sample of approximately 600 adults in each state, aged 18 and older, living in all 50 U.S. states and the District of Columbia. For more details on Gallup’s polling methodology, visit www.gallup.com.

← Kane County Recycling Collection Coming May 10
Want to File a Complaint for Smoking, Property Nuisance or Food Safety? Here Are 3 Ways to Do That →